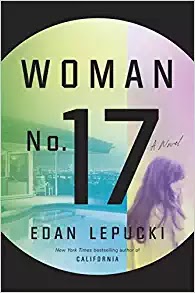 Woman No. 17 by Edan Lepucki is a clever, fast-paced novel about identity and motherhood. It's narrated by two women in alternating chapters. We first meet Lady Daniels as she hires a nanny to care for her toddler while she writes a memoir about raising her eldest son, Seth. The nanny, S, is a recent college grad starting anew after a failed performance art project. Both women have difficult mothers and are working through their issues. Neither one is very likable, which may turn off some readers, but the complications each faces feel real and the pacing kept me wanting to know what happens next.

Their relationship soon goes beyond that of employer/employee. Many scenes between them are wonderfully written, especially one in which they get drunk together and end up in Lady’s walk-in closet. And S's relationship with Seth adds another layer to their tangled lives.

Lepucki has a way with metaphors (I love the description of the houses on the hill that look down on Lady's backyard as "The Eavesdroppers.”) She's also able to incorporate technology (texting and Twitter) in a convincing way that actually moves the plot forward.

The art projects S creates have me scratching my head. They seem to be what modern art jokes are made of. Her final project and resulting review left me with the unfortunate feeling that it's not how good you are, but who you know. This is also the case with Lady, whose memoir is based on an article she wrote for an editor friend of her husbands.

As much as I enjoyed the writing, humor, and basics themes, the novel wasn’t what I expected from the book jacket summary. “Sinister noir” to me implies bleak settings and tough, hard-boiled characters. Further, claiming that S’s relationship with Seth takes a “disturbing, possibly destructive turn;” that old secrets are threatened to be exposed; and Lady and S are playing a “careful game” which “endangers the things they hold most dear” greatly exaggerates the stakes.

So, move the book from the mystery/thriller category to contemporary fiction and enjoy it for what it is: a well-written, fast-paced novel that primarily explores issues of identity and motherhood through two imperfect women.

Heather
I adore reading and have since I was a little girl. When I'm in a good book, dishes go undone, laundry stays unwashed, and children go unfed. Luckily, my two boys like reading about as much as I do! I love mysteries/thrillers and contemporary fiction. As an English major, I'll sometimes dip into the classics, especially if it's something I should've already read (like Faulkner). I love American History. And I'll always read a good memoir. My tastes are varied and eclectic, making me a Vagabond Reader.

In Praise of Wasting Time
by Alan Lightman

Killers of the Flower Moon: The Osage Murders and the Birth of the FBI
by David Grann