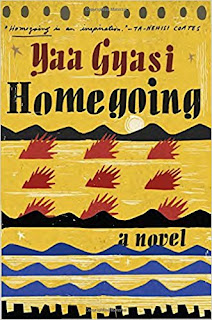 A fire sweeps through the beginning of Homegoing, set by Maame, an Asante slave who had just given birth to her Fante master’s daughter, Effia. Maame escapes in the chaos, leaving Effia behind, and reaches an Asante village where she bears another daughter, Esi.

The novel follows the descendants of her two daughters (in alternating chapters), generation by generation, from the 1770s to today. Both sides deal with incredible hardships due to the slave trade, which, like Maame’s fire, devours the Gold Coast of Africa.

Effia marries an English slave trader and lives at the Cape Coast Castle in what is now Ghana. At the same time, Esi is captured during a raid and brought to the same castle as a slave bound for America. Effia’s family line deals with the effects of human trafficking and colonization on the African continent, while Esi’s descendants endure slavery and the American history that follows the Civil War.

It’s an astonishing amount of history and number of characters in 300 pages, but Gyasi manages it by making the novel a series of short stories. Each chapter stands on its own, but taken as a whole offer a heartbreaking look at how the past leads to the present and how trauma reverberates from generation to generation.

The stories set in Africa seem richer to me, both in setting and characters. They are perhaps the ones closest to Gyasi’s own heart. It could also be because American history is better known, and the stories seem designed to hit all the major points in a somewhat stereotypical way: slavery, chain gangs, Jim Crow, Harlem jazz clubs, drugs, deadbeat parents, etc.  Despite that, Gyasi does a great job portraying time and place. It was always difficult to leave characters behind and move on to the next story, but before long, I was immersed in the new world.

In a lecture on the idea that "History Is Storytelling" Yaw, a descendant of Essia, tells his students, "When you study history, you must always ask yourself, Whose story am I missing? Whose voice was suppressed so that this voice could come forth? Once you have figured that out, you must find that story too." Gyasi has achieved this in Homegoing. It's difficult to believe this is her first novel. I can't wait to read what she publishes next.

Time has a wonderful article about Gyasi and the origin of the novel: http://time.com/collection-post/4357214/homegoing-yaa-gyasi-profile/

Finally, Gyasi is interviewed by Slate:  http://www.slate.com/articles/arts/books/2016/06/yaa_gyasi_on_her_debut_novel_homegoing_and_getting_blurbed_by_ta_nehisi.html
at January 24, 2018

Heather
I adore reading and have since I was a little girl. When I'm in a good book, dishes go undone, laundry stays unwashed, and children go unfed. Luckily, my two boys like reading about as much as I do! I love mysteries/thrillers and contemporary fiction. As an English major, I'll sometimes dip into the classics, especially if it's something I should've already read (like Faulkner). I love American History. And I'll always read a good memoir. My tastes are varied and eclectic, making me a Vagabond Reader.

In Praise of Wasting Time
by Alan Lightman

Killers of the Flower Moon: The Osage Murders and the Birth of the FBI
by David Grann